You can publish whatever you want in the Offcanvas Section. It can be any module or particle.

You can also add the hidden-phone module class suffix to your modules so they do not appear in the Offcanvas Section when the site is loaded on a mobile device. 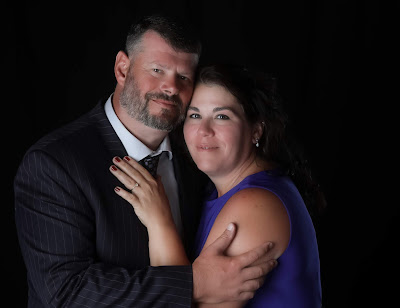 DIVINE ALIGNMENT with a BRIDE PRICE

It was a scorching August day in the middle of the Nevada desert where our wedding ceremony took place.  Just before 3pm with sweat dripping off of our foreheads, the Reverent Kenneth Baker asked Laura and I to recite our previously prepared vows to each other.  To be perfectly honest, my original plan was to "wing it" and just tell her what came upon my heart in that moment.  The hour before the Pastor showed up however I found myself in deep thought about all of the life that I had been lived up to this point as I then reflected on what I would soon say before God and everyone.  The day set apart for the Lord (August 15th) had been months away which then reduced to weeks away and now had become seconds away as the camera phones were now being set to video mode as the silence covered us up like a blanket.  "Ronald" the preacher signaled, "You may begin."

"Umm.....  Babe..."  was all I got out before everyone began laughing as if I said something hysterical. Laura tried to calm my nerves with a smile saying, "I knew you were going to say that."  After the chuckles receded, I began speaking about the high points and low points of my life.  I mean truly, I had accomplished and acquired some pretty amazing things during these 42 years on earth but I admittedly had also lost everything several times too without an eject button within reach. During my vow, I summarized my life with the fatigue of building card castles and sand castles again and again just to witness them blown down or knocked over.  I then recounted a time in my life where it had gotten so out of hand that my soul cried out to God pleading that He would strip everything away until all I had was Him.  "That prayer was answered" I sternly announced as I continued the next section of my vow.

"There was a time in fact when I only had the shirt on my back and I didn't even own that."  The audience searched their memories for what phase of life they thought I may have be referring to as I continued.  "My second prayer was, 'God!  All I ask of You is to give me a firm foundation to build on' and that prayer too was answered." Through the years of in depth biblical studies I've charged myself with, I knew that Jesus had to be the center or it wouldn't work.  I remember speaking to the crowd as I gazed into Laura's eyes saying, "and we met for our first date to do a Bible study together."  Our family seemed to have raised their eyes as if to think about where they met their spouse for the first time and I'm pretty sure their personal recollections were quite different than the story I was telling.  For me it was really about the BRIDE PRICE and knowing that the suffering had to be shared in order for our Father to grant me His daughter in marriage. 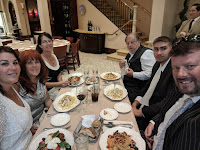 You see, Christ Jesus is the Bride Groom who is one day going to return for His bride.  (The Church)  There are many stories in the Bible of men having to pay a Bride Price to include but not limited to Jacob, King David and Christ Himself.  Jacob paid his uncle Laban 7 years of labor for his daughter Leah and then another 7 years of labor for his other daughter Rachael.  King David slayed Goliath as the Bride Price to be awarded in the marriage of King Saul's daughter Michal.  With this being said, what did Christ have to pay as a Bride Price to be worthy of becoming the Bride Groom?  Obviously it was the cross and at 3pm the veil was torn in two as the believers were now covered in the blood of the Son to have a direct connection to The Father Himself.  At exactly 3pm on the day set apart for the Lord, we muttered with Christ in us for the last time individually, "It is finished." That was the moment that the three of us became unified as one.

Later that night, Laura and I danced for the first time under the full moon as Mr. and Mrs. Ronald Edward Robey Jr.  It was a very prophetic evening that had been drenched with significance referencing numeric patterns of dates to complete confirmation of miraculous signs from above.  Today we are just as excited as the day we got married regarding what God has in store for us in addition to how His dream can now come to pass through us since we have finally been divinely aligned. May the Lord receive all of the glory.  -Ron

A majority of roofs that are replaced here in the Richmond, Katy and Houston Texas area come from  insurance proceeds.  In fact, studies show that 95% of all roof replacements are powered by an insurance claim.  This means under 5% of homeowners pay “out of pocket” for roofing projects.  This highlights the importance of not only finding a good roofing crew or contractor but also finding a professional company that specializes in dealing with insurance claims.  Here at Kingdom Roof and Fence, we have been serving our greater Houston Texas community for the past decade and are looking forward to helping you out with your next project.  You can call us at 346-291-4492 or just simply visit us online at kingdomroofandfence.com for more information.

Let’s talk about insurance claims for residential homes for a second as we pose a few questions.

Would you pay the sticker price for your next automobile at the car dealership?

It’s not common knowledge that your insurance company send out a representative that is working for them and has their employers best interests in mind.  Another fact is that the insurance proceeds scope of work is a negotiation process that much like buying a car starts off benefiting the company as much as possible then can lean towards your favor later on.

Secondly, if there were to be any unexpected expenditures that were unforeseen before the project started like decking, are you aware that the project could be considerably more?

When you have a contractor that is compensated by insurance proceeds, there is no concern of additional charges accumulated as the project advances.  If there is any shingle square discrepancies or decking needed, your contractor will supplement them directly to the insurance company for you.  This means that you will not be required to pay anymore out of pocket payments other than the agreed deductible.

Thank you for reading this blog that was created by the management here at Kingdom Roof and Fence.  Once again give us a call at 346-291-4492 to receive your free roof inspection and allow our company to navigate you through this process.  You can also contact us online at kingdomroofandfence.com. We are an official Kingdom Business that was created to advance God’s Kingdom here on this earth.

Build a Wall or Tear one Down?

It’s almost impossible to be an American and not be aware of the wall controversy that has our divided country debating politically.  Today I don’t write to you from the viewpoint of a white male, a Texan or from any social economic status but rather I present myself to you today from the viewpoint of a child of Almighty God.  It’s certainly not my intention as well to get involved with earthly politics when my God sits on the throne and advancing His Kingdom is my goal.  With all of that being said,  I read Nehemiah this morning and a story stuck out at me when the people from Jerusalem were rebuilding the walls of their town.  Let’s point out a few things and see if there’s any correlation or supernatural correlation to the world that we’re living in today.

With the blessings of King Cyrus of Persia, the fire damaged town of Jerusalem was approved to be rebuilt by Ezra while surrounded by hostile forces.  Any rebuilding progress would be proposed as a threat and would be stopped at any cost.  Instead of building the towns walls first to provide protection, Ezra and the Levites (God’s chosen people) decided they should first rebuild His church.  This was amazing considering the opposition had dangerous plans to prevent any rebuilding efforts.  Zerubbabel was appointed over the temple construction and in early autumn, all of the Israelites who had returned assembled at the newly built altar for a unified purpose.  This is not something that was common to be UNIFIED about anything since the time when the people were united in building the tower of Babel.  The Bible clearly says that when the people are all united, “nothing they set out to do will be impossible for them!”

Once the church was constructed, Nehemiah returned with the task of building the wall.  This construction project had laborers who literally worked from sunrise to sunset and with one hand building the wall and the other holding a sword to defend themselves.  Nehemiah instructed the men to “listen for the blast of the trumpet and rush to wherever it is sounding.  Then God will fight for us!”  Do you think God will fight your battles for you?  Moses instructed the people in Exodus 14 to not be afraid. “Just stand still and watch the LORD rescue you today.”  “The LORD himself will fight for you.  Just stay calm.”  Then the LORD said to Moses, “Why are you crying out to me?  Tell the people to get moving!”

This blog is sponsored by:

Custom commercial Christmas light installation projects is our specialty and doing what no other contractor can is a normal day for our professionals.  Above and beside these words you’ll see a wreath going being measured around an HOA property sign.  This is a fabrication project that was formed to fit these signs throughout the neighborhood exactly to measurements.  Imagine for a second how a traditional circle wreath obstructed the sign and focal point of this community.  After our work, it was the best project that had ever been done and every year gets better! 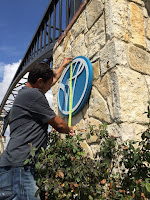 Let’s explore why our company is separated from the competition and it’s a good decision to do business with us.  First we would like to highlight the purchase program that allows our customers to buy the lighting from us directly.  This option allows you to have ownership of the decorations which will leave your business with only an installation and removal price the following years.  For example, a $15,000 display will look great the first year with either plan but year two will look better with us because the addition of new materials inside of your budget.  If you consider the typical lease option that most commercial Christmas companies offer, you will NOT OWN anything after 3 years and have spent $45,000.  Forward think with the best and let’s begin a relationship that will last forever.

Call Kingdom Christmas Lights at 346-291-4492 to schedule your free consultation today and let’s make this holiday season the best ever!  We service the entire Houston Texas area and we’re looking forward to meeting you in person.  May the Lord receive all of the glory through our efforts.